Adam Kennedy 30-Sep-2016 Blues, Concert Reviews, UK
US-based blues chanteuse Lisa Mills arrives in the quaint Scottish border town of Gretna, a place which is not usually known for music but instead for its shotgun weddings.

However, rather than the usual wedding parties, Gretna is awash with roots music enthusiasts attending the blues night of the annual Lockerbie Jazz Festival.

Hailing all the way from Alabama, Lisa Mills is far from home this evening. Fortunately, the locals are quick to welcome her with open arms. Grasping her trusty guitar, which has been affectionately named “Evangeline”, Mills stands alone as she walks the audience through a soulful, gospel-tinged blues set.

Lisa whets our appetite for what is to come by previewing several superb tracks from her forthcoming album, Mama’s Juke Book. Throughout the course of the evening, Mills consistently demonstrates her phenomenal vocal range effortlessly reaching those sustained high notes song after song. This is particularly the case during the likes of Mills’ take on the Storyville number “Good Day For The Blues” and the previously unreleased “Can’t Slow Down”. The latter stands out in the set and is sure to be a contender for a future album release.

Mills takes us back to her 2010 release, Tempered in Fire, with a trio of songs from the album featuring in the show. This includes the beautiful slow blues number “My Happy Song”. Lisa also introduces the music of her native Mobile, Alabama with superb covers of Wet Willie’s up-tempo, feel good swampy blues numbers “Keep On Smiling” and “Countryside of Life”.

Lisa brings her set to a close with a sublime rendition of “Better Than This” from her last studio album, I’m Changing. As the song ebbs and flows, Lisa once again exhibits her incredible vocal range, which is enough to make the hairs on the back of your neck stand up. There is a soulful quality to Lisa’s vocals reminiscent in places of Beth Hart; you will find few vocalists “Better Than This”.

Lisa has reunited with Grammy Award Winning producer Trina Shoemaker for her forthcoming record, largely funded by a successful Kickstarter project. The album is a very personal musical tribute to Lisa’s late mother who maintained a notebook containing lyrics to songs from some of her favourite artists, which form the basis of the album. We look forward to more of what is to come from Lisa Mills when her new album is released next year. 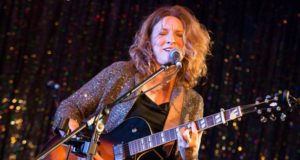